Welcome to my personal blog!

I am doing software development in many areas, with my main fields of experience being cross-platform software (C++/Qt), Android apps (native), Linux & DevOps (Bash/Python/Ruby, Docker, ...).

Open Source is one of my passions -- I am a developer and maintainer of many open projects and regularly start contributing to additional ones. Support me on my mission! My other favourite activities include photography and being outdoor as much as possible. I am too volunteering at the local fire department. I went to school at HTL Braunau (Electronics / Software Engineering & Mobile Computing), studied at FH Hagenberg (Mobile Computing) and work currently at Felgo.

A big deal landed recently on the indie game platform itch.io, the “Bundle for Racial Justice and Equality”.
It contains whopping 743 paid indie games at small cost (at the time of writing, more to come).

You can get the bundle here. (Note: No “referal” link or alike)

What is the issue?

When you buy the bundle the contents don’t get automatically added to your library, due itch.io’s recent change.
You might forget about the bundle and the games you payed for. Also unclaimed items don’t show up in your library in the desktop client or web dashboard. So it’s best to claim them.

2020-06-11: Note from itch team - they are totally aware of the situation. Please patiently wait and don’t ask, they are working on it. Thanks!

Note: We will be updating this page soon, we know it’s difficult to navigate so many games. We know you want a button to add show everything in your library. No need to reach out. Any new games added to the bundle will automatically show up here. Thanks!

Now press enter on your keyboard, press up, press enter, press up … repeat till no game page opens up anymore.
This way you will claim all games on the current page, do this for all pages of the bundle.

Note that the best solution would be: Itch adds a “claim all” option, but all can be done is ask & wait for it. Whether they add “claim all” or not, the solution of this post works.
Otherwise you would need to click every single game yourself, go back, scroll down and find next, click again and again..

How to make it even more easy:
With shell command below you can automatically claim repeatedly without interaction.
As with everything you paste in developer tools and shells, know what you do and you are responsible for your own actions.

This page helps you to get started using file synchronization with Syncthing and Markor as your favourite file editor of choice. Required applications are Syncthing (Desktop & Android) and Markor (Android).

Syncthing is a protocol to sync files between your devices, with implementations for various platforms. Unlike other (even open source) sync and backup solutions, it does not require complex server setup or dependence on 3rd parties. According to their website:

Syncthing replaces proprietary sync and cloud services with something open, trustworthy and decentralized. Your data is your data alone and you deserve to choose where it is stored, if it is shared with some third party and how it’s transmitted over the Internet.

To start off, install Syncthing and set up a shared folder. More info on how to do that here.

Then, all you need to do is tell Marker where to look for and save files:

I use Syncthing - both on my desktop (Linux Debian) and on Android phone (Xiaomi Redmi 4x). Open source, privacy (my data doesn’t get to the third party), etc.

I prefer keep separate folder for texts (~/text at desktop, and ~/text aka /storage/emulated/0/text at phone), because syncthing sync little text files lightning fast - without having to wait for all other (big) files to be synchronized.

For desktop linux I install syncthing by default repo (sudo apt install syncthing), start it and set it up via browser interface (http://127.0.0.1:8384/). I use “homebrew” selftuned Openbox install, so syncthing run at start via ~/.config/openbox/autostart.sh (added there (syncthing -no-browser) &). 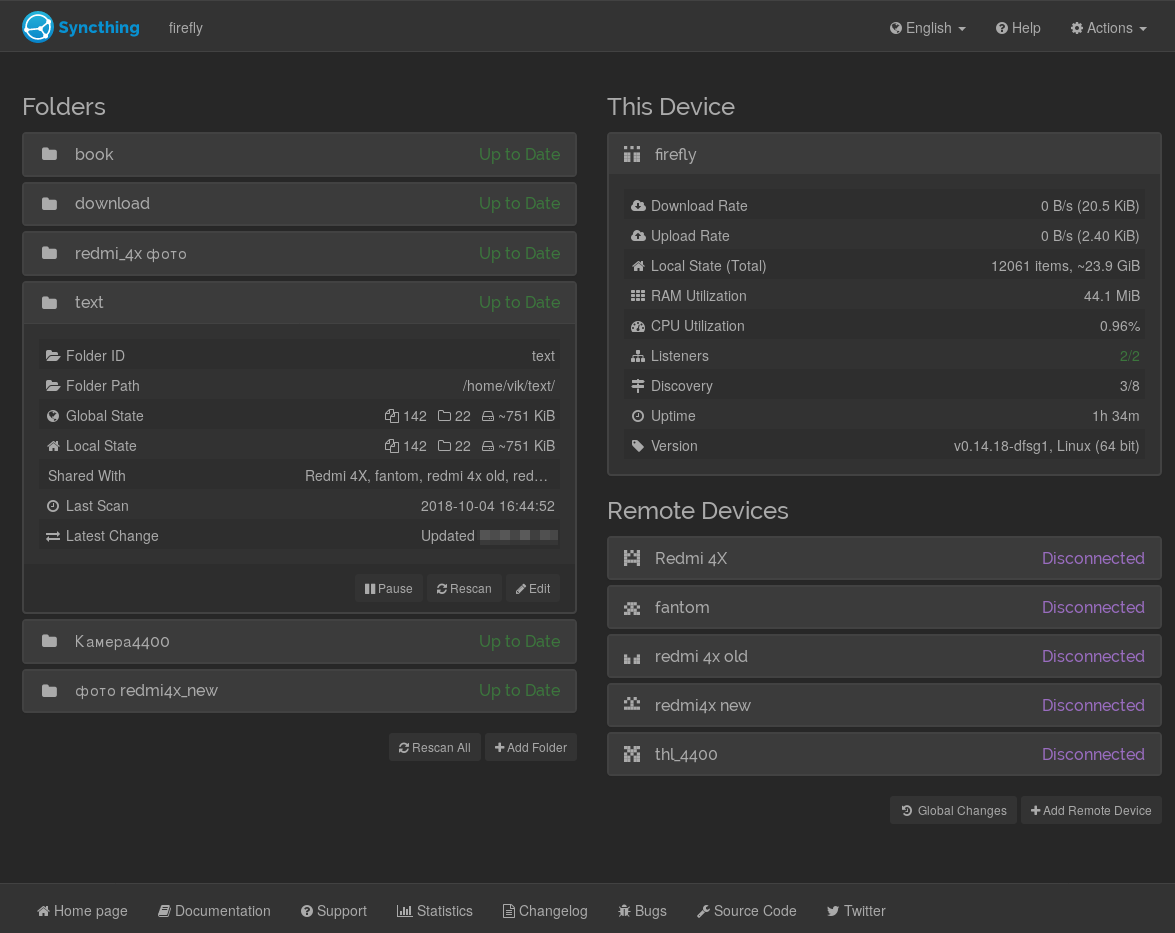 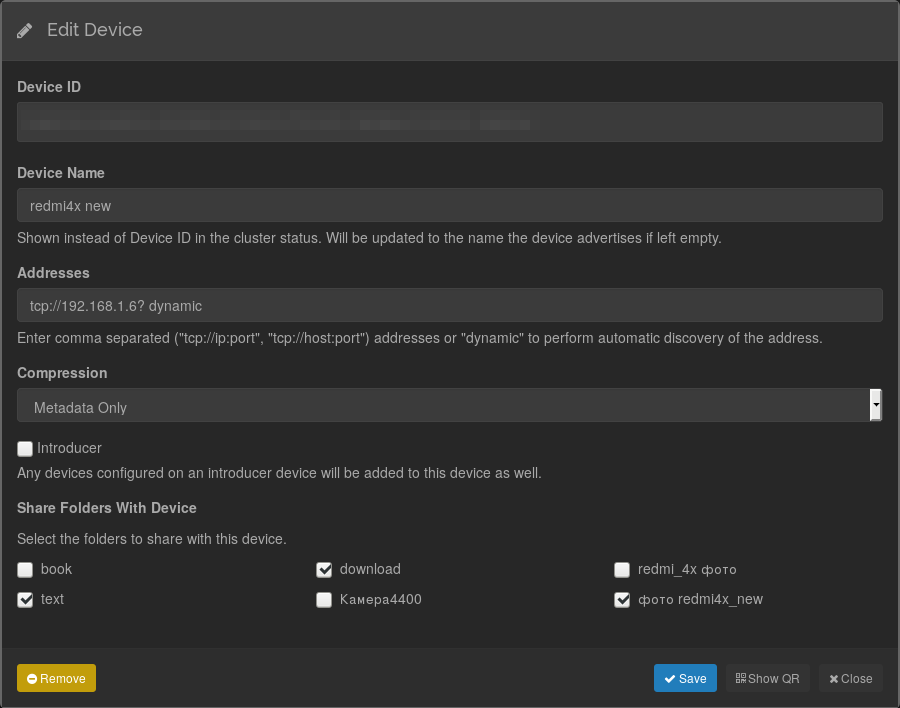 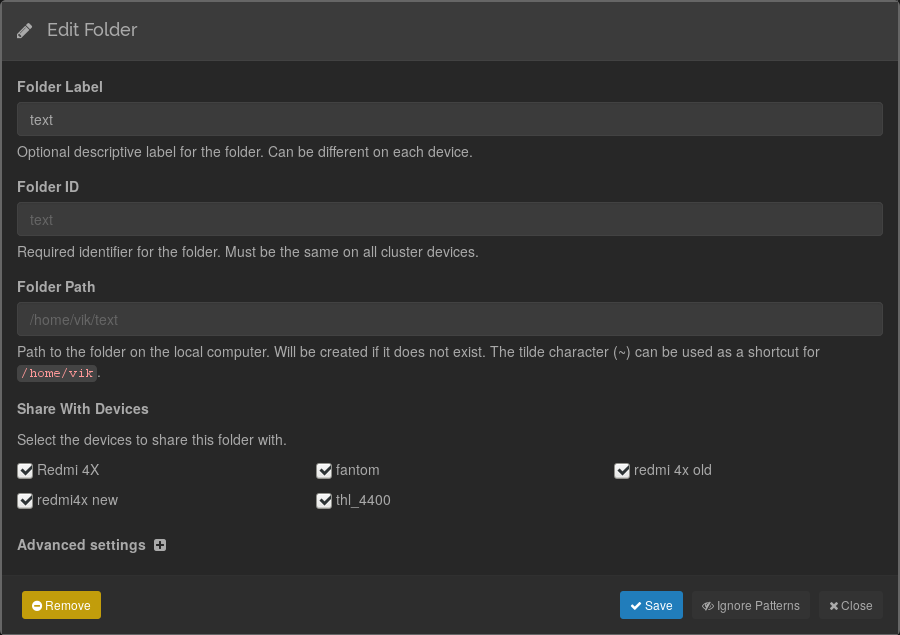 For android phone I get syncthing from f-droid.org and connect it with desktop.

Rarely I may get version conflict, but syncthing keep both version of files (see at screenshot) and I just use vimdiff.

Debugging is an essential part of software development. In case of Ubuntu Touch apps there are basically two ways to debug an app. This blog post showcases both ways.

Some basic knowledge of GDB is assumed as well as of Clickable which is the recommended tool to build Ubuntu Touch apps. If not, search the web for GDB tutorials and/or read the Clickable Documentation.

Clickable provides a desktop mode to run an Ubuntu Touch app on desktop. This mode also enables debugging via GDB. Again there are two ways:

1) Run GDB in a terminal 2) Start gdbserver and debug with your preferred IDE.

This compiles the app with debug symbols (provided that CMake or qmake is used) and starts GDB inside a docker container. Use GDB commands like break main and run to start debugging. You can find more examples, like how to set breakpoints on a specific lines of code here.

This starts the gdbserver on port 3333. Check for an option to do GDB Remote Debugging in your IDE and connect to localhost:3333.

Debugging in desktop mode is convenient, but it does not cover all use cases, e.g. those involving Content Hub, App Armor or arm specific issues. In such a case you need to debug directly on an Ubuntu Touch device.

This works independently of the debugging described below.

Apps that are started through their own elf binary can be debugged on-device via Clickable’s Debug feature, as described in its docs. If this does not match your app, continue reading.

Note: The steps described below make your rootfs writable and use apt to install packages. Do only proceed if you know what you are doing and how to reinstall Ubuntu Touch in case of trouble. Also note that your changes might get lost after system updates.

Make sure to install a debug build of your app, e.g. via Clickable:

Make sure you have started the app at least once normally with that version.

Enter a shell on your device via SSH and run all subsequent commands on the device.

You may need to repeat this step after an OTA update. Installing libc6-dbg is necessary due to a bug that probably won’t be closed, soon.

Let’s use Webber as an example. In this example /home/phablet/.cache/ubuntu-app-launch/desktop/webber.timsueberkrueb_webber_0.5.1.desktop. You will need that path in a second.

Change directory to the installation path of the app, which can be found at /opt/click.ubuntu.com/<appname>.<maintainer>/current. In case of Webber

In case of Webber this returns Exec=webber %U. This means the app is started by the command webber (we can omit the %U). This executable may be located directly in the app installation directory or in the sub directory lib/<arch-triplet>/bin, where <arch-triplet is arm-linux-gnueabihf or aarch64-linux-gnu depending on your device. In case of Webber on a armhf device the executable is located at lib/arm-linux-gnueabihf/bin/webber.

When an app is started, some environment variables are set and the app may rely on them to work properly. That’s why you may or may not need to do this step before starting gdb on your app, too. In this sections you will learn how it can be done.

Start your app normally. Then find out the process ID (PID)

where <command> is the executable that starts the app. Example for Webber:

We ignore the grep command we just ran and find the PID to be 32384. While the app is still running execute:

replacing <PID> with the the PID identified above:

Now the environment is set up as it would be on a normal app start. Close the app and start debugging as described in the next section.

Now you are set up to start your debugging session:

In case of Webber this is

The -ex "handle SIGILL nostop" part avoids stopping at a SIGILL signal caused by OpenSSL probing the abilities of the architecture. Use GDB commands like break main and run to start debugging.

Notice: Jonatan Hatakeyama Zeidler is the author of this article. The content was originally written in March 2020 and first published on this (gsantner’s) blog. ‘I’ refers to the original author.